The Battle of Monterrey and the Mexican-American War 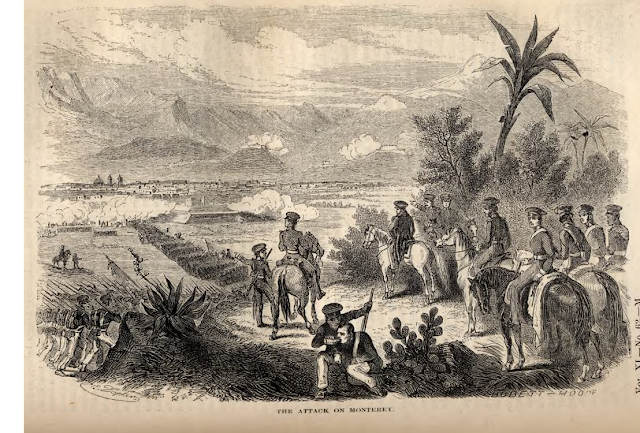 The Battle of Monterrey, an encounter in the Mexican-American War, took place September 21-24, 1846.  Approximately 6.500 United States troops under the command of Gen. Zachary Taylor attacked the fortified city, which was defended by 10,000 Mexican soldiers led by General Pedro de Ampudia. Taylor approached the city from the east, and sent another contingent on flanking movement to the southwest to block the Mexican troops’ escape route. Pinned in, Ampudia on the evening of the 22nd directed his troops to take up defensive positions within the city of Monterrey. On the 23rd the two armies engaged in house-to-house combat there.  As the U.S. troops prepared for a new assault on the next morning, Ampudia moved to surrender, and Taylor allowed him and his troops to leave the city.

The United States’ armed conflict with Mexico largely emerged from Americans’ eagerness to expand their nation westward to the Pacific Ocean. As American trappers and settlers poured across the Great Plains, many began to resent the fact that lands to the south and west of the Louisiana Purchase tract remained territories of Mexico, which had freed itself from Spanish colonial control in 1821. Americans’ persistent attempts to settle these lands led to conflict with the Mexican government and, eventually, war.

The Mexican Republic had welcomed Americans to settle in their northern territory of Texas in the 1820s, but after a decade it became plain that the Americans disliked Mexican rule. In 1835 the American settlers revolted against Mexico and, in the following year, established their own Republic of Texas. Many Americans immediately began to demand that their nation make Texas a part of the United States. The Mexican government warned that this would mean war.

In 1844 Americans elected James K. Polk as the nation’s new president. Polk had campaigned on the issue of national expansion, calling for the annexation of Texas, Mexican California, and the Oregon Territory that the United States and Great Britain had occupied jointly since 1818. Just before leaving office in early 1845 President John Tyler, a Virginian seeking to provide a new area into which slavery might expand, secured a joint resolution from Congress annexing Texas to the United States. Mexico responded by breaking off diplomatic relations.

Upon taking office President Polk immediately turned to the acquisition of Mexico’s northern territories. He first instructed his minister to Mexico to negotiate for the purchase of the territories, but this proposal sparked a wave of indignation and nationalist fervor in Mexico, and the minister left Mexico after only a few months.

Angry that Mexico had rebuffed his offer, Polk sent U.S. troops under the command of General Zachary Taylor to the Rio Grande River in January of 1846. Mexican officials believed that the Texas-Mexico frontier stood one hundred miles to the north, at the Nueces River, and interpreted Polk’s move as a deliberate provocation. Mexican troops quickly arrived at the Rio Grande as well, and skirmishes broke out between the two forces. Polk leaped to argue that “Mexico… has invaded our territory and shed American blood upon American soil.” Congress quickly provided him with a declaration of war.

In 1845 an American editor wrote that the American annexation of Texas represented the “fulfillment of our manifest destiny to overspread the continent allotted by Providence for the free development of our yearly multiplying millions.” By 1846 newspapers across the country had appropriated the term “manifest destiny” in their attempts to show that God intended the American nation to stretch from Atlantic to Pacific.

The United States’ decisive victory in the Mexican War added some 500,000 square miles of new territory to the nation. These lands included Texas, as well as the Mexican territories of New Mexico and Upper California. Eventually they would become the American states of California, Arizona, and New Mexico, and comprise significant parts of Utah, Colorado, Nevada, and Wyoming. Their acquisition intensified debate over the question of slavery’s future in the West: would slaveholders be able to take slave property into the acquired territories and establish a slave economy there? Would the new states that emerged from the territory won from Mexico be slave or free?
at June 20, 2017