James B. Weaver and Populism 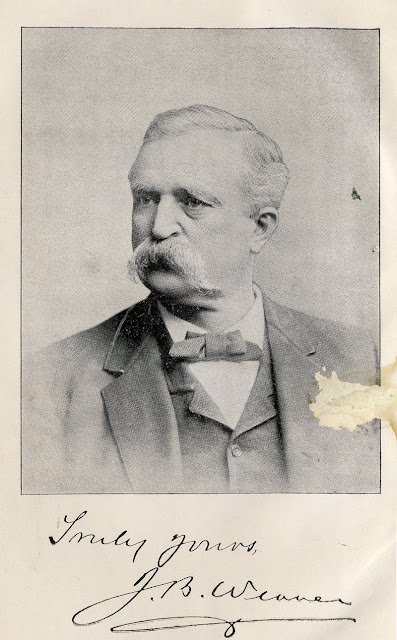 James B. Weaver ( June 12, 1833–February 6, 1912) was the People’s (or Populist) Party candidate for President of the United States in 1892. He was born in Dayton, Ohio and lived in Michigan as a child before his family settled near Bloomfield, Iowa in 1833.  Practicing law, he took an early interest in politics, and attended the 1860 Republican National Convention that nominated Abraham Lincoln. He served as an officer in the Civil War. Unsuccessful in Iowa politics and unhappy with the Republican Party’s stance on issues of concern to Iowa farmers, Weaver joined the new Greenback Party in 1877. In the following year he won election to Congress. In 1880 he became the party’s presidential nominee and won over 300,000 votes - about 3.3% of those cast.

When the Greenback Party dissolved Weaver joined the Populist Party, an organization that took up the Greenbackers’ call for in increased money supply, and added a broader agenda emphasizing agrarian reform. In 1892 Weaver won the Populists’ presidential nomination, campaigning on a platform that called for unlimited coinage of silver, an income tax, an eight-hour work day, and government ownership of railroads. He campaigned nationwide, accompanied by his wife Clara, and often the Kansan Mary Elizabeth Lease. He gained over one million votes - 8.5 percent of the total. He won the states of Kansas, Colorado, Nevada and Idaho outright, and also collected delegates in North Dakota and Oregon. In 1896 the Populists merged with the Democratic Party and nominated William Jennings Bryan of Nebraska for the presidency. Weaver supported Bryan. In a campaign that revisited many of the issues considered in 1892, the Republican William McKinley won election by a decisive margin.

This image is available on the Illinois During the Gilded Age web site and the NIU Digital Library.