Mary Elizabeth Lease - He Shall Be Rescued from Such a Fate 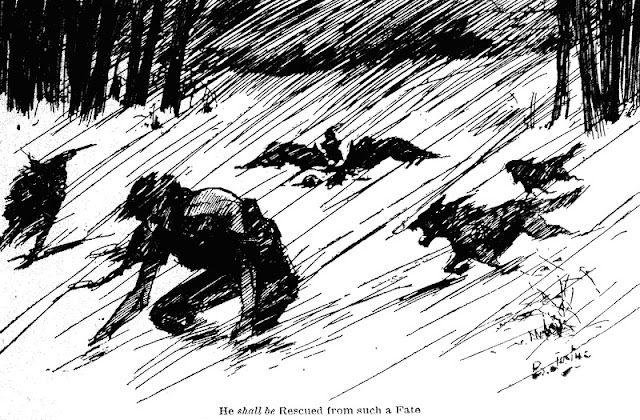 Created by B.M. Justice, this illustration from Mary E. Lease’s The Problem of Civilization Solved paints a grim picture of life in the Gilded-Age United States. It shows a single individual besieged by attacking dogs (or wolves) and a bird of prey. Lease was a vocal advocate of the Populist Party and critic of the period’s vogue of Social Darwinism and laissez-faire individualism, a sentiment that the above illustration captures vividly. Yet she was not an advocate of government provision of social welfare payments or benefits, which she derided as “class legislation.” Rather, she advocated a government program removing “the deserving poor, the honest men and women who are willing to work but to whom work has been denied,” from large cities and settling them in the countryside. “They can be rescued from their poverty,” she concluded. (373)

She wrote: “Obese satiety elbows starvation it every turn along our streets. The tide of pauperism is steadily rising and we are rapidly approaching the condition of Europe in the last century. Class legislation has done much to swell the list of America’s paupers, but Europe’s system of dumping its pauperized class upon our shores has done more. An ever-increasing swarm of dependents are with us. The cause can be traced to class legislation and militarism. The one the curse of our free institutions and the other the bane of European civilization. The remedy lies, not in doling out alms to humanity until the recipients of charity become chronic beggars, but in first removing the cause of extreme poverty by giving every toiler access to the soil, making the ballot the key to unlock the garner where his birthright lies.” (5)

Lease attacked laissez-faire economics from a humanitarian perspective, and linked it to the Populist agenda: “Then let all who love mankind more than millionaires unite for the common welfare. We will introduce the initiative and referendum, nationalize our railroads and labor saving machinery, issue paper money redeemable by taxation and remonetize silver.” (374) Yet she ultimately addressed the issue of urban poverty from the point of view of utility, efficiency and administration, and even raised the issue of eugenic measures: “Love and goodness, backed by the strong force of the state, must go down into the dens where the human wild beasts of society hide from the light of day, and empowered by that wise legislation that removes the leper or prevents the smallpox patient from contaminating his fellow beings remove the social Huns of the cities to lands set aside and purchased by the government for their use, subjecting them to such medical inspection and treatment as will check the reckless propagation of criminals and devitalized humanity. The pauperized class should be given an opportunity to work out their own fortunes under favoring conditions. Our first care should be to send them out under supervision of agents who could supervise large plantations, the tillage of which could be overseen and made profitable for them; having all their work planned for them by the agent, they would in time learn thrift and business capacity. Eventually they would become proprietors, reaping the incentive of all labor, just remuneration. The purchase of lands, medical inspection and government agencies would cost the state less than the never-ending expense now entailed for inadequate police protection arid the erection and equipment of buildings that are constantly over-filled by a constantly increased army of criminals. Stem the current of corrupt humanity by removing the fount from which it flows, make the vicious and idle dependent upon their own efforts with the incentive of compensation, all the compensation that life holds if they succeed and the alternative of annihilation if they fail to put forth honest effort when the helping hand is extended, for while God was severe in his denunciations of those who oppress the laborer he was none the less severe in his denunciation of the idler. `If a man shall not work neither shall he eat.’“ (371-2)

Lease provided a fascinating vision of a powerful, administrative state in America, yet it was one informed by the classical liberal tradition that she sought to critique.

All quotations are from Mary Elizabeth Lease The Problem of Civilization Solved (Chicago: Laird and Lee, 1895)