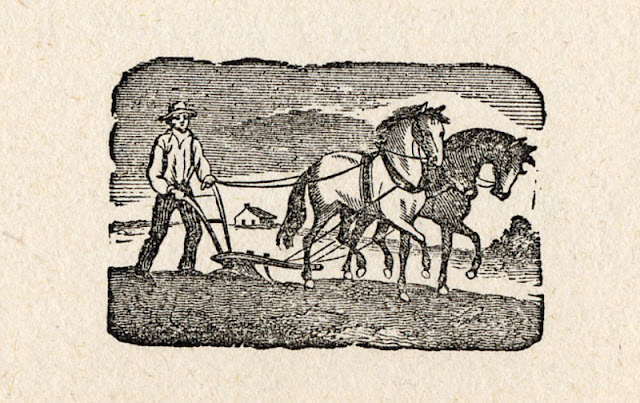 This image is an illustration in Stephen Smith’s Grains for the Grangers, Discussing All Points Bearing Upon the Farmers’ Movement for the Emancipation of White Slaves from the Slave-Power of Monopoly (Philadelphia: John E. Potter, 1873), a political tract written in support of the Granger Movement.  Oliver H. Kelley of Minnesota founded the Order of Patrons of Husbandry, also known as the Grange, in 1867. The organization admitted men and women, an unusual practice in that time, and sought to provide often-isolated farm families with opportunities for social interaction. It also encouraged more productive farming through the distribution of scientific information. The organization grew rapidly  beginning in 1873 due to an economic depression. Many farmers attributed their struggles to the workings of the railroads, on which they relied to deliver their crops to market, as well as merchants and other middlemen. Many Grangers promoted state regulation of railroad shipping rates. Their success led to a well-known case heard by the United States Supreme Court, Munn v. Illinois (1877), which upheld the State of Illinois’ regulation of rates. Grangers often experimented with cooperative marketing organizations in an attempt to circumvent middlemen in the marketplace as well. These efforts proved ineffective, and many states soon repealed laws regulating railroad rates. Although the Grange did not prove to be a wholly successful political movement, it established a precedent for cooperative organizations in rural America and served as a predecessor for the Populist Movement of the 1880s and 90s.

The above information is drawn in part from Thomas Burnell Colbert’s essay on the Grange Movement in the Encyclopedia of the Great Plains.